There Are 78 Tarot Cards Divided Into Two Main Groups: 22 Major Arcana Numbered 0 To 21 And 56 Minor Arcana Divided Into 4 Suits. The Tarot Cards Will Provide Interesting Insights But If You Want To Astonish Your Sitter With Your Accuracy Use Clairvoyant.

According to Tarot historian Tom Tadfor Little, traditional playing cards were first seen in Europe in 1375, having been brought over from the Islamic societies where they had been used for centuries before that. These cards were not, however, Tarot cards. At this point, he says, there is no evidence to show that Tarot cards had yet been created, which goes against many claims that ordinary playing cards evolved from the original Tarot deck. It wasnt until 1440 that the cards that were most likely the origin of Tarot cards were first mentioned. In a letter from the Duke of Milan, there was a request for several decks of cards to be used at a special event. The letter differentiated triumph cards from regular “playing cards”

It does appear, however, that the first Tarot decks were created as a game. There were four suits with cards numbered one through ten and also court cards that included a queen, king, knight and page. The deck also included 22 symbolic picture cards that did not belong to any suit. The decks were used to play a game called triumph that was similar to bridge. In triumph, 21 of the 22 special picture cards were permanent trump cards. The game spread quickly to all parts of Europe. People began referring to as tarocchi, which is an Italian version of the French word tarot, around 1530. In 1781, in France and England, followers of the occult discovered Tarot cards. They saw the symbolic pictures of the cards as having more meaning than the simple trump cards they were used for at the time. They used the cards as a divination tool, and occult writers wrote about the Tarot .
After this, the Tarot became a part of occult philosophy. There are also those who believe that Tarot cards originated in Egypt. In some circles, they are thought to be the sole surviving book from the great fire that burned the libraries of ancient Egypt. In this theory, the cards are considered to be the heiroglyphical keys to life.

The Tarot deck is made up of the Minor Arcana and the Major Arcana. Like regular playing cards, the Minor Arcana of the Tarot deck includes four suits.Rather than spades, hearts, diamonds and clubs, however, the suits are: wands ,swords,cups, and pentacles. Each suit has meaning regarding a specific approach to life. The cards within these suits are numbered one through 10 and also include the court cards — the king, queen, knight and page. The Minor Arcana cards represent the more minor, practical daily ups and downs in life. The  Major Arcana are not associated with the suits. They include the picture cards that represent principles, concepts and ideals. They are numbered one through 21, with the 22nd card Fool marked as zero. The Major Arcana cards represent strong, long-term energy or big events in some area of life. Seeing a Major Arcana card about a particular subject in one reading and then getting a Minor Arcana card about the same subject in the next reading would mean that this subject is becoming less important in your life.

Before a reading is performed, the cards are shuffled by the person receiving the reading. Some say this transfers that persons energy to the deck. The person receiving the reading should also be concentrating on the question or area for which they want guidance while he or she shuffles the deck. Once the cards are shuffled and the deck has been cut, the reader lays out the cards in a pattern called the spread.
Each position in the spread has a meaning, and there are many different types of spreads, ranging from those that incorporate a single card to spreads that include all 78 cards of the deck. Which spread is used is up to the reader and the specific type of question or reading. Some spreads focus more on a specific type of information. For example, one spread might focus more on emotional matters, while another might bring in more information about the influences of others. One of the most common spreads is the Celtic Cross:

The Celtic Cross The ten card Celtic Cross is the most common Tarot card layout Ive ever come across. With this popularity there comes the problem of many variances of placement. Below is the one I use with my comments about the interaction of the placements. In my opinion the Celtic Cross works best when used to answer specific questions. Remember to put some thought into the formulation of the question you wish to ask.

Here is the spread: 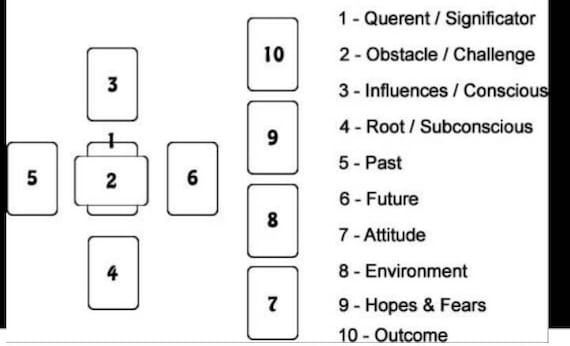 Card 2; The immediate challenge facing the querent. You will often pull a difficult card here, which will indicate an obstacle that must be overcome. When you pull a “good”; card here, examine it carefully because it will still represent a challenge.

Card 3; Distant past, foundation. This card should indicate the root of the subject matter of the question

Card 4; More recent past, including events. This will indicate events taking place, not necessarily directly connected to the question.

For example, if a love affair going wrong Card 3 would show the root of why it is going wrong, whereas Card 4 will show something that recently happened to reflect this. You could see this as a “check comment”; card – a way of seeing that the reading is sound.

Card 5; The best that can be achieved. This is directly related to the question. Note that this may not necessarily gel against Card 10 – it depends whether you are able to get the best. However, a negative card here probably means that it is worth cutting your losses rather than putting any more effort into the situation.

Card 6: Immediate Future. This indicates events in the next few days or week(s). This reading does not cover months.

Card 7: Factors or inner feelings affecting the situation. Compare this against Card 1 in order to understand underlying forces/trends. If there is conflict between them this tends to indicate that the querent is going in the wrong direction.

Card 8: External influences. People, energies or events which will affect the outcome of the question and are beyond the querents control.

Card 9: Hopes or fears around the situation. This may produce a card that confuses us badly. Always bear in mind that hopes and fears are closely intertwined, therefore that which we hope for may also be that which we fear, and so may fail to happen. Sometimes it is useful to draw a second card for clarification after the reading has been laid, and to read the two together.

Card 10: Final outcome. This is a fairly self explanatory card. However it is worth saying that if the card comes up somewhat ambiguous, once again it may be worth drawing three extra cards to clarify. These should be interpreted through the lens of Card 10. So if the card drawn is the Tower and we draw the Ace of Cups, Princess of Cups and Four of Cups in a reading about a relationship, the Tower would indicate that it is time to move on. The Ace of Cup suggests that a new relationship is promised with better things ahead. The Princess of Cups brings new love (and possibly pregnancy). The Four of Cups shows deep levels of contentment and happiness, and many options for progress.

Reversed Cards– Because Tarot cards each have one picture that faces in one direction, it is possible that cards will be facing the opposite direction when dealt. According to most sources, this doesnt change the meaning of the card, but simply weakens the impact of the meaning.

What do They Mean? Tarot cards have different meanings depending on where they fall in the spread. Here are a few of the face cards and their various meanings: Death: Ending; Transition; Elimination; Inexorable forces

Whether you believe that Tarot cards hold any power or ability to shed light on your life, your problems or your future might depend on how easily you can open you mind to the idea of it. Many Tarot-card readers have differing ideas about how or why the Tarot works. In fact, some say we only need the Tarot to help us until we learn to get in touch with our inner guide on our own